#FACTCHECK: PNP offices' claim that Ninoy Aquino was linked to NPA HAS NO BASIS 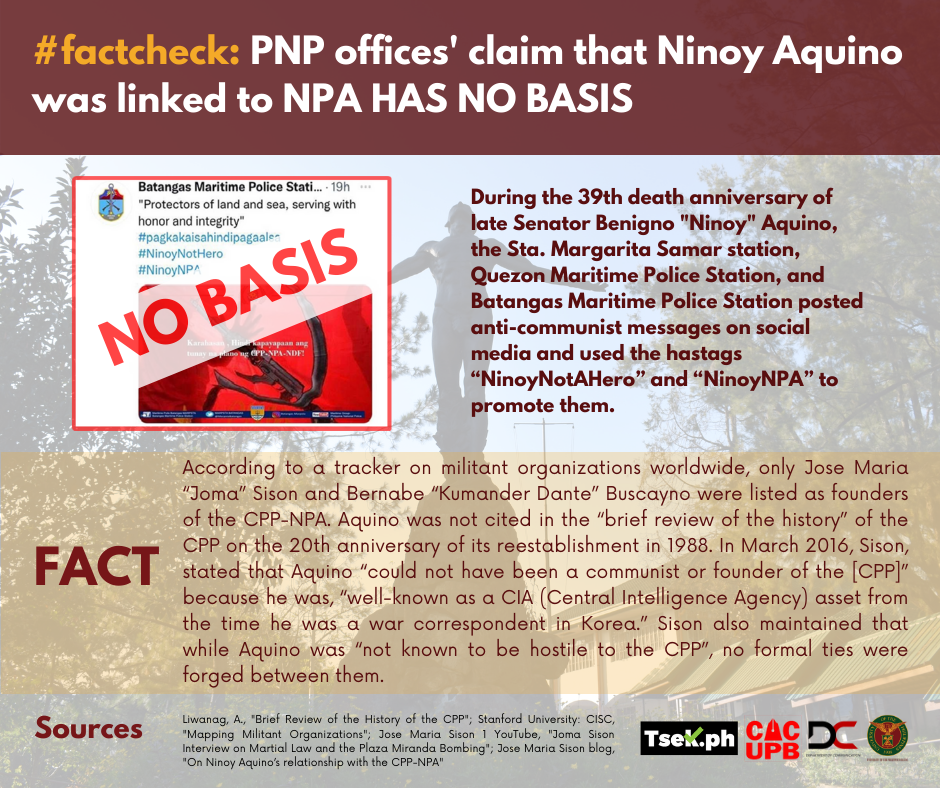 #FACTCHECK: PNP offices' claim that Ninoy Aquino was linked to NPA HAS NO BASIS

On August 21, 2022, the 39th death anniversary of Senator Benigno “Ninoy” Aquino Jr., several offices of the Philippine National Police (PNP) claimed that the slain senator was linked to the New Peoples’ Army (NPA), the armed wing of the Communist Party of the Philippines (CPP).

There is no evidence to support the claim that Aquino was linked to the NPA.

According to a tracker on militant organizations worldwide maintained by Stanford University’s Center for International Security and Cooperation, only Jose Maria “Joma” Sison and Bernabe “Kumander Dante” Buscayno were listed as founders of the CPP-NPA.

Aquino was not cited as a founder or member in the “brief review of the history” of the CPP issued on the 20th anniversary of its reestablishment in 1988.

In an interview in March 2016, Sison, CPP’s chairperson, stated that Aquino “could not have been a communist or founder of the [CPP]” because he was, “well-known as a CIA (Central Intelligence Agency) asset from the time he was a war correspondent in Korea.”

Sison also maintained that while Aquino was “not known to be hostile to the CPP”, no formal ties were forged between them.

The posts have since been taken down and are now being investigated.

Liwanag, A. (1988), Brief Review of the History of the Communist Party of the Philippines: On the Occasion of the 20th Anniversary of its Reestablishment.