Spurious last-ditch reports of candidates being disqualified and a buildup of fabricated vote tallies of presidential contenders took hold of social media as voters trooped to precincts on Monday.

They are wefts in a pattern of disinformation observed by fact checkers from Tsek.ph since November 2021 that not only sought to influence voters’ choices but also convey an impression that winners had already been picked even before polling closed. These in turn could undermine confidence in the credibility of this year’s elections as an exercise in democracy.

Tsek.ph is a collaborative fact-checking initiative of 34 partners from academe, media and civil society for the May 9 elections. It is supported by the University of the Philippines, Google News Initiative, Rakuten Viber, Meta, Meedan and the Embassy of Canada.

Polling precincts were hours away from closing and votes had yet to be counted, but social media were swamped with manufactured tallies of election results showing either Marcos or Robredo leading the race.

Comelec Resolution 10695 stipulates that counting and consolidation of votes, including those from overseas absentee voting, shall be held on May 9 after the casting of votes and closing of polls at 7 p.m.

Both Marcos and Robredo had their fair share of fake tallies that day. Tsek.ph partners published 10 fact checks on various claims declaring Marcos leading in partial counts, two in which he and Duterte were winning, and another two with Duterte dominating the count.

Five fact checks were about Robredo taking the lead and one declaring that both she and Pangilinan had won overseas absentee votes by a landslide. Interestingly, one claim showed Robredo and Duterte the winners. 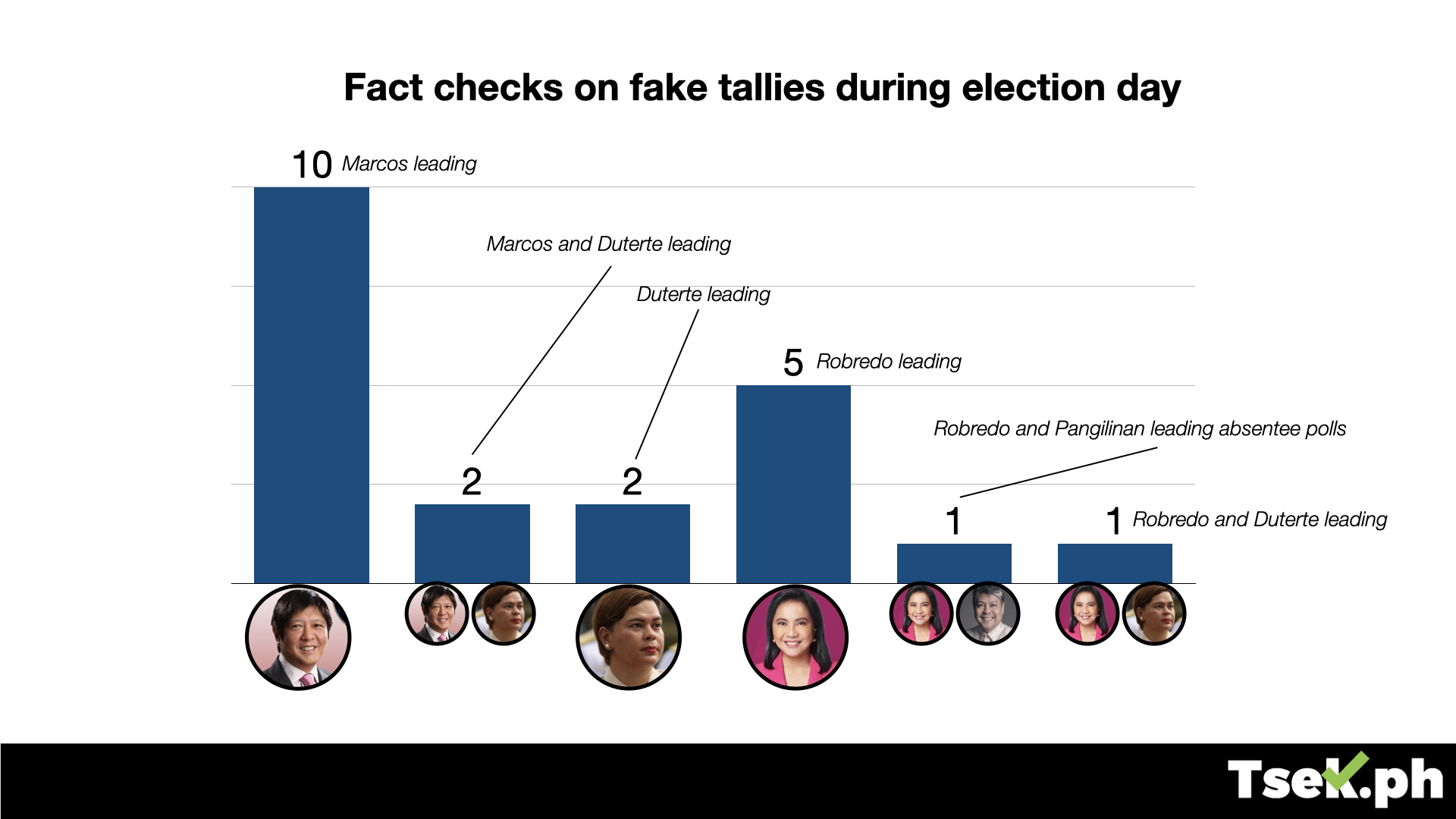 The false narratives were overwhelmingly pushed on Facebook, and occasionally on Twitter and YouTube, mostly by Marcos supporters, including Showbiz Fanaticz channel whose election-related claims have been previously fact-checked.

Nearly all the posts utilized eye-catching graphics. Some tried to mimic the interface of mainstream media such as Rappler’s live election results and TV5’s infographic on the media reach and engagement of candidates. Both were passed off as real poll results.

One netizen ran a graphic culled from Robredo's Facebook post in 2016 that showed her ahead of Marcos in the vice presidential contest at the time. Marcos bitterly contested the results, alleging electoral irregularities. The Supreme Court dismissed his petition last year.

The fake election results came out as early as 8:27 a.m. or about two-and-a-hours after the polls opened. They showed Marcos supposedly leading over Robredo and Manila Mayor Francisco “Isko” Moreno Domagoso. A bogus vice presidential vote count showing Duterte far ahead in the election was posted 11:55 a.m.

Some posts gained traction in just a few hours. A tally falsely claiming Duterte was in the lead chalked up 2,898 interactions. A post announcing the Robredo-Pangilinan tandem’s landslide victory abroad, also rated false, picked up 3,514 interactions. 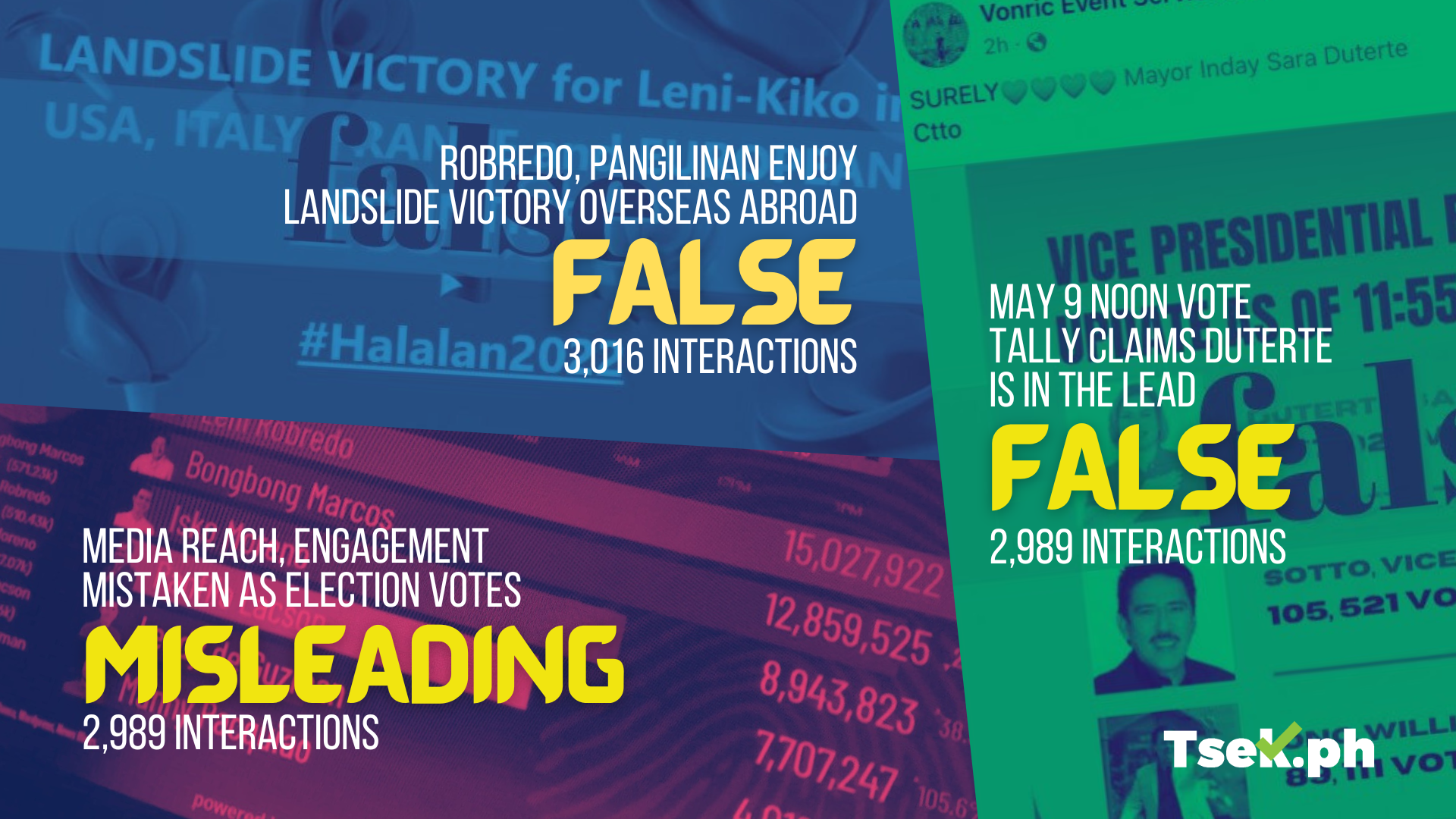 The bogus counts were accompanied by allegations that election results had been preprogrammed. One such post collected 145,000 shares.

The torrent of fake vote tallies on election day sets this year’s elections apart from the dominant election-day narratives in the 2019 midterm polls.

Back then, senatorial, local and party-list candidates were staggering from an onslaught of red-tagging came voting day. Local candidates and progressive groups were also the targets of disqualification lies.

The sham poll results online in this year’s elections demonstrate the country’s evolving disinformation playbook on social media that was first thrust into global consciousness following the 2016 presidential election.

Ahead of the 2016 polls, legions of netizens in the country and overseas had been organized into a network to systematically propagate positive messages about then candidate Rodrigo Duterte and negative ones against his opponents. The camp of Marcos, then a vice presidential bet, also successfully deployed this strategy, refurbishing his family’s image and later continually attacking Robredo when he lost the race.

This May 9, 2022 elections, the fabricated vote tallies rightly fall within the firehose of disinformation strategy Tsek.ph detected and described in its May 8 analysis. This strategy is characterized by an outpouring of rapid, repetitive, and indiscriminate topics coming from a volume of sources and targeting multiple online platforms. For months the Marcos-Duterte tandem had enjoyed nonstop positive messaging while the Robredo-Pangilinan duo were bombarded with negative, even malicious messaging.

The Makabayan bloc, meanwhile, was subject of a spurious disqualification document purportedly from the Comelec two days ahead of this year’s elections. Its partylists such as Bayan Muna, Anakpawis, Kabataan, ACT Teachers and Gabriela were allegedly disqualified.

A Facebook page, “Lamrag Sinirangan,” claimed that the partylists, along with its senatorial bet Neri Colmenares, had been disqualified by Comelec because of their links with the Communist Party of the Philippines. The false claim was debunked by Comelec, but the falsehood persisted throughout the voting hours.

In 2019, the same ploy was used against the Makabayan bloc by Facebook pages identified with police offices and military reservists. The false information was posted in the wee hours of election day.

A related disinformation strategy is red-tagging members of the Makabayan bloc or establishing their connection with the Communist Party of the Philippines- New People’s Army even without basis. However, on election day, all senatorial bets of Robredo-Pangilinan tandem were also in the red-tagged list, allegedly for being supported by the communists. The list came from an eponymous Facebook page, DSWD 4ps Updates, which has the logo of Pantawid Pamilyang Pilipino Program, also known as 4Ps, of the Department of Social Welfare and Development.

Other false claims circulating on election day include poll cheating such as vote buying and the fate of reelectionist senator Leila de Lima.

A handful of fact checks were on vote counting machines (VCM) that broke down, reportedly 1,800 in all, thus delaying the voting or turning voters away.

Maharlika, a pro-Marcos influencer, insinuated in a video on Facebook and YouTube that the Catholic clergy had a hand in delaying the replacement of a malfunctioning VCM at a precinct in Quezon City where her family had voted. She also took a dig at Catholic priests who had endorsed Robredo’s candidacy. 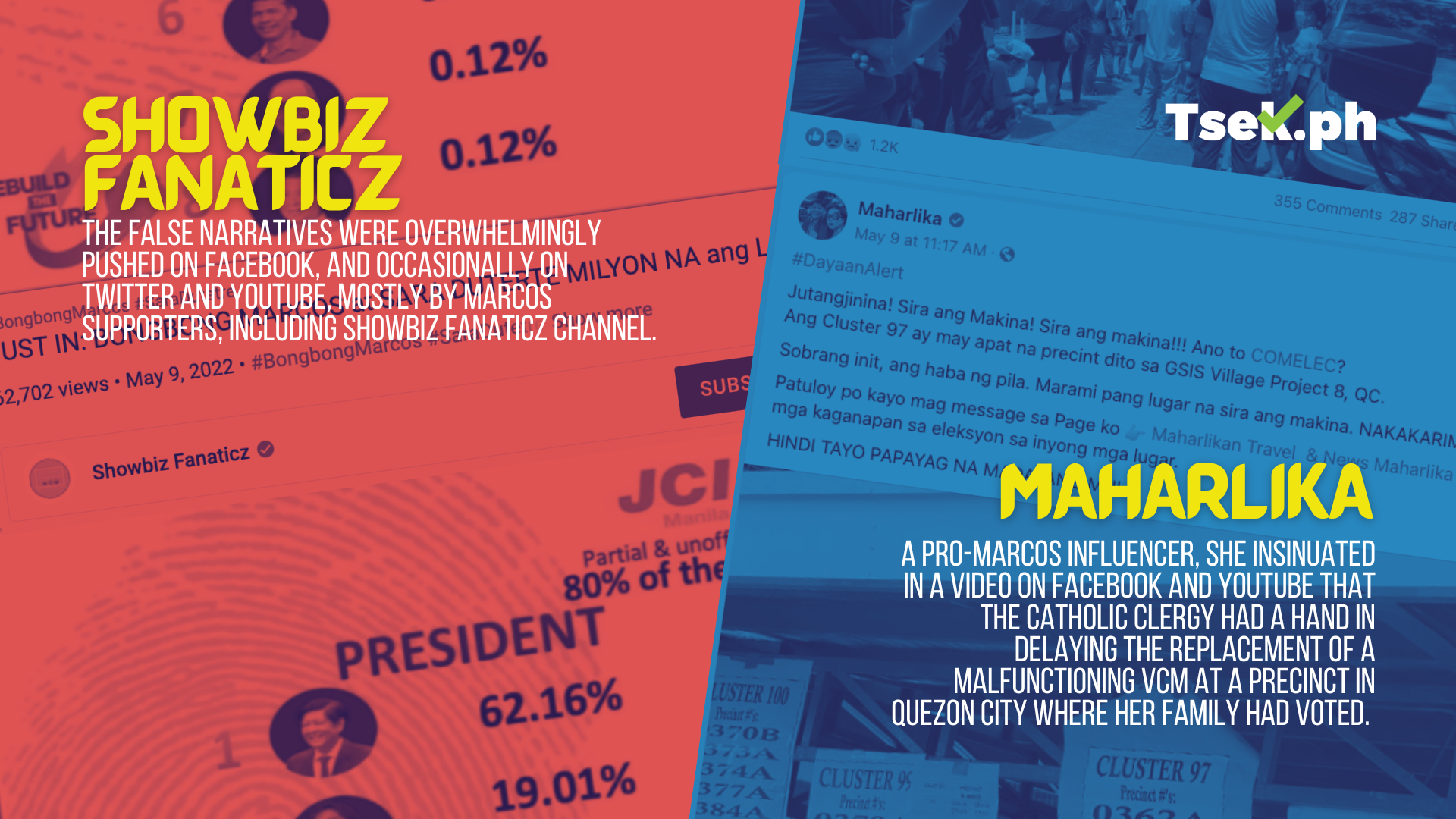 Her allegation had no basis at all. The Omnibus Election Code only allows inspectors, watchers, Comelec representatives and voters inside and around the polling place. When a VCM or its secure digital card malfunctions, Comelec’s contingency plan requires inspectors to report this to supervisors of the Department of Education assigned to the classroom. After Comelec officials are notified, city officers will keep the broken VCM as the supervisors replace the machine. Nowhere does the Catholic church figure into the picture. —Text by Maria Diosa Labiste and Yvonne T. Chua; infographics by Felipe Jose Gonzales